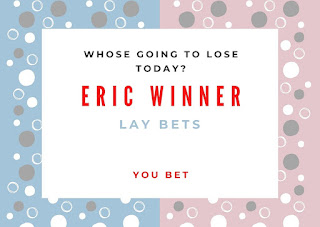 2.45 Wings Of A Dove 6/1 hasn't produced a speed figure good enough to win this race and the horse hasnt won on an artificial surface in 6 attempts also the trainer is 0-13 in the last 2 weeks and its been 29 runners and 46 days since the stable last had a winner.
7.45 Shanghai Rock 8/1 hasn't been in good form lately nor has the stable who have had 25 runners in 41 days since they last had a winner and 0-6 in the last 2 weeks, it races as though a longer distance would suit it better Q Twenty Boy 5/1 has only slow times on its 2 runs over this c/d including when it won, the jockey is a poor 3-71 for the stable, its been 17 runners over 22 days since the stables last win and its another horse that seems to need a longer distance to shine.
Good luck if you follow.
Posted by TO at 11:51